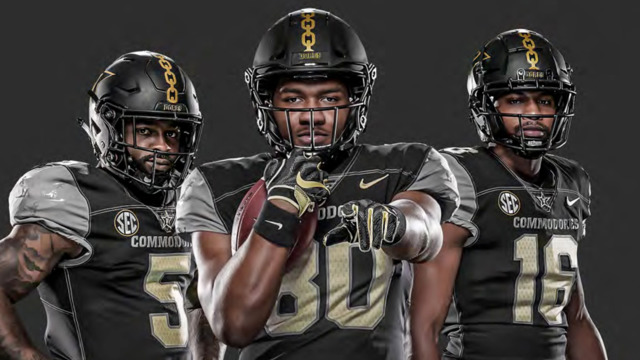 The NFL Draft is quickly approaching this week as many Former Commodores look to hear their name called in this years unique 2020 Draft. Dreams will become reality for key contributors to the program over the past 4 seasons performing for Coach Mason and Commodore Nation.

The ultra talented trio for the Commodore offense includes RB Keshawn Vaughn, WR Kalija Lipscomb, and TE Jared Pinkney. All three players had long and productive careers on West End and will be remembered for years to come by many who got to watch them showcase their talent.

Starting with star RB KeShawn Vaughn who transferred to Vanderbilt from Illinois as a Junior and had two seasons to prove himself as a play-maker in the SEC. As a Commodore, KeShawn tallied over 2,000 yards after while injuries throughout his career. He scored 21 touchdowns as a Commodore (9 in 2019) while averaging 5.2 yards per carry. Those are really impressive numbers running behind a beaten up offensive line and mixed results at Quarterback during the 2019 campaign.

Vaughn now ranks 5th all time in rushing yards and tied for 4th all time with 21 touchdowns in Vanderbilt history. Not only can he run the ball, but he is a very reliable receiver out of the back field.

At the combine, Vaughn measured 5’10”, 214 pounds. He posted a 4.51-second 40-yard dash, 32-inch vertical jump and 117-inch broad jump, per The Tennessean. KeShawn’s projections have been all over the board but, Ian Kenyon of Bleacher Report, expects Vaughn to land early in the third round.

Despite the high hopes from Kenyon, Vaughn has also been projected to fall on Day 3 of the Draft as a 5th round Pick. According to CBS Sports, Vaughn is rated as the No. 11 RB while Sporting News slotted him at No. 10

Up next is talented WR Kalija Lipscomb. The New Orleans native had a breakout Junior year tallying 87 receptions including 916 receiving yards to go along with 9 touchdowns. Lipscomb wasn’t nearly as effective as he was in 2018 but, can you can’t really blame him for that? The 6’1″ receiver has been a huge contributor for the Commodores over the last four seasons on West End. Lipscomb has been working out with Tua Tagovailoa the past month so he’s definitely been staying in shape leading up to this weekend.

Lipscomb now ranks 4th all time in Vanderbilt History with 198 receptions and 5th all time with 2,356 receiving yards. He also amazingly ranks 2nd all time in touchdowns. Kalija was also a very reliable target in the red zone throughout his career. With his speed and quickness, he had many different tools to pull out on those talented defenses he played against. He has proven himself as a play-maker during his time at Vanderbilt and is projected to be a 6th round pick this weekend. According to CBS Sports, Lipscomb is rated as the No. 30 WR while Sporting News puts him at No. 28

Lastly, we have the ultra talented TE Jared Pinkney. The Georgia native also had a breakout Junior season with 50 receptions and 774 receiving yards. Pinkney also tallied an impressive 7 touchdowns while averaging 11.6 yards per catch as a reliable target in the red zone. The versatile TE was very consistent during his time in Nashville despite going through his rough patches under OC Gerry Gdowksi.

Pinkney was a big target and an impressive blocker as well. The 5th year senior ranks 1st all time in Vanderbilt history by a TE in receiving yards with 1,560 and is tied for the most receptions all time with 114. He is also 2nd all time as a TE with 14 career touchdowns. The 6’4″ prospect is also projected to be a Day 3 prospect in the 6-7th rounds of the NFL Draft. According to CBS Sports, Pinkney is rated as the No. 7 TE while Sporting News puts him at No. 8.

QB Riley Neal has received interest from multiple NFL teams per reliable sources on Twitter. In addition, talented prospects including CB Cam Watkins, OL Saige Young, and LB Caleb Peart all hope to achieve their dreams of being selected. Whether it’s hearing their name called from the podium or finding themselves as an undrafted free agent for an NFL squad, Commodore Nation will support these men.

Vandy fans, let’s cross our fingers and hope to see as many former Commodores on the draft boards this weekend as these athletes look to achieve their childhood dreams.