One area that may be an offensive strength for the Commodores this fall is the wideout corps. Although the team loses star Kalija Lipscomb, solid positional receiver Justice Shelton-Mosley, and CJ Bolar (transfer portal), there is solid production and talent returning bolstered by plenty of depth.

Cam Johnson, RS Sophomore: After coming back from an injury that caused him to redshirt his true freshman season, Cam had a solid season and became a consistent target for Vanderbilt’s carousel of QBs in 2019. Johnson had 30 receptions for 316 yards and tied for the lead among Commodore WRs with 3 TDs, including the game winning TD in Vandy’s lone SEC victory over Mizzou. The former 4-star prospect out of Brentwood Academy looks to build upon last year and become one of the conference’s top wideouts in 2020.

Amir Abdur-Rahman, RS Sophomore: Vanderbilt fans have high hopes for any WR who wears the number 87. After showing incredible flashes of talent as a freshman, the 6’4” wideout was forced to redshirt after a season-ending injury in 2019’s opener. As a freshman, Abdur-Rahman played in all 13 games and had 4 catches for 108 yards and an acrobatic one-handed diving TD catch vs Tennessee. Look for Abdur-Rahman to become a consistent target this season. 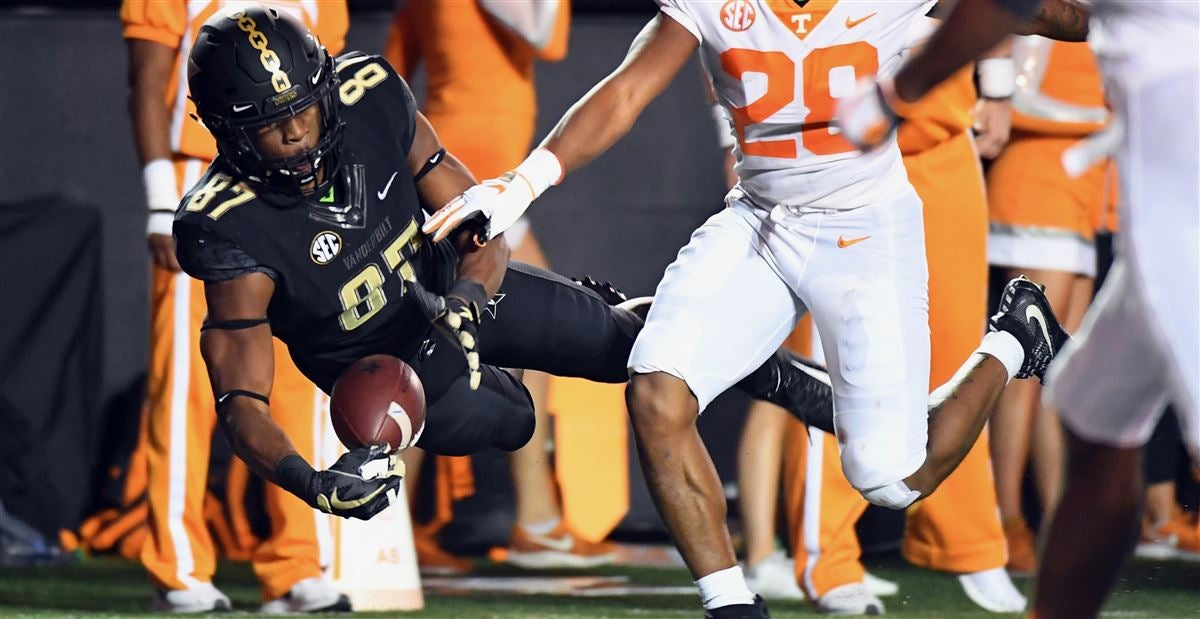 Chris Pierce, Senior: Another big target for QBs, Pierce has consistently been a part of the rotation during his time at Vandy. Last year, he flashed big play potential with his 75 yard touchdown catch vs Purdue. During his career at Vandy, Pierce has amassed 27 receptions for 373 yards and 2 TDs. Look for Pierce to once again increase his production in his final year as Vandy opens up the offense.

James Bostic, RS Junior: Bostic quietly had his most productive season in 2019. The 6’3” target had 11 catches for 112 yards on a team that struggled to find offensive consistency. Bostic will look to separate himself more through camp and during the snaps he receives in the rotation this season, as he could be primed for another positive spike in productivity under new offensive coordinator Todd Fitch.

Mac Hereford, Grad Transfer from Alabama: Hereford caused a splash this offseason with his decision to finish his career at Vanderbilt. A walk-on at Alabama, Hereford saw snaps in two games for the Crimson Tide. He brings experience and plenty of reps against many 5-star players in Tuscaloosa. He’ll look to crack the WR rotation and special teams corps. during his grad transfer season at Vandy, while providing knowledge, experience and a solid locker room presence for the Commodores.

Jackson Winrow, RS Senior: Winrow has provided depth at the WR position and will look to build off of his experience and 3 receptions for 26 yards during his career. He’s seen the field in 13 games as a Commodore

Tyrell Alexander, Grad Transfer from Oklahoma State: Alexander comes from an offensive-minded Oklahoma State program and looks to bring depth and outside experience to Vanderbilt’s WR room. Alexander showed flashes of potential for the Cowboys, but couldn’t crack the WR rotation before switching to DB and seeing extensive special teams snaps, including recording tackles vs TCU and Oklahoma respectively in 2019. He’ll look to become an offensive threat for Vandy’s offense in 2020 and contribute to special teams in any way he can.

Devin Boddie Jr., RS Freshman: The speedy WR didn’t see any action for the Commodores a year ago, but he put up impressive numbers at Whitehaven High School. He’ll look to enter WR rotation or become a special teams contributor this year.

The incoming freshman signees include Will Sheppard (Mandeville, LA) and Logan Kyle (Cypress, TX). With both being listed as 3-star prospects who put up big numbers during their high school careers, it’s not out of the question that either could be a part of the rotation this fall. Both are also listed at 6’3” which gives them SEC size.

Overall, I expect positive strides from the wideouts this season. Cam Johnson should develop into one of the conference’s top receivers and there’s plenty of experience between Abdur-Rahman, Pierce, Bostic, and Hereford.

I believe their production will increase under Todd Fitch’s tutelage and play-calling. It will be interesting to see who enters the rotation for other snaps as well; I predict we’ll see freshman Will Sheppard or Logan Kyle receive some meaningful snaps this fall and I expect Winrow and Alexander to contribute in the snaps they receive on offense and special teams.