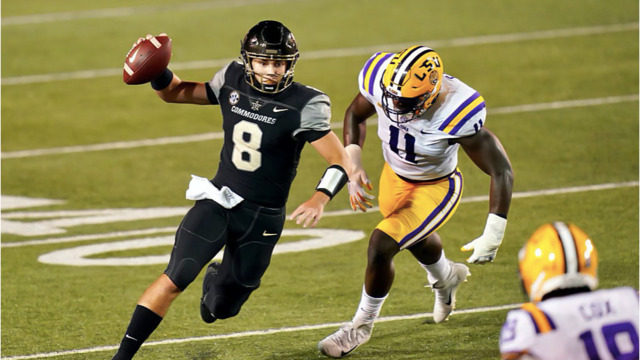 True freshman QB Ken Seals has flashed potential during his first 2 games as an SEC signal caller, but he’s also shown signs of being, well, a true freshman. Today we’ll take a look at what’s gone right in Seals’ first two games as the starting Commodore signal caller, as well as what to look for this Saturday vs South Carolina.

Seals has shown maturity during his two starts, most notably during his first college game in a competitive battle in Aggieland. The clip above demonstrates his pocket awareness as he delivers a pass at the last possible moment before taking contact. Seals will need to accept pressure and continue to deliver the ball quickly behind an o-line that’s faced serious attrition due to COVID-19 opt-outs.

Last Saturday, Seals faced increased pressure from LSU as Vanderbilt shuffled its offensive line. Above, we see Seals step up in the pocket to avoid pressure and deliver a first down completion to Cam Johnson. Credit to Seals for stepping up and delivering the ball quickly again.

Versatility as a Mobile Passer and Runner

One of Seals’ more impressive plays on the season came on his first career TD pass vs. Texas A&M. The play is a designed bootleg rolling to the right, providing enough time for the blockers to set and the wide receivers to create separation. Whilst on the run, Ken throws a dart to Abdur-Rahman in the corner of the end zone, out of reach from the lagging DB. The touch on this ball is impressive for any QB, let alone for a true freshman. I could watch this beautiful play on loop all day long.

Ken scrambles out of the pocket and throws a dime to one of this season’s reliable targets in TE Ben Bresnahan. Note his ability to read the pressure, evade it, and quickly find an open target. The Vanderbilt offense will find more success if Seals can continue to get rid of the ball quickly.

Seals’ ability to extend plays with his legs is underrated. With Vanderbilt driving down the field and in need of a first down, he steps up in a collapsing pocket, confidently tucks the ball and gains 9 needed yards to set up a 4th and 1 conversion to continue the drive. We’ve only seen a few instances of his ability to gain extra yards during weeks 1 and 2, but I believe his ability to make something out of busted plays and missed assignments will prove instrumental if the Commodores are to be competitive in upcoming winnable games.

Driving in opponent territory, Seals finds Abdur-Rahman (his favorite target in the A&M game) with a throw towards the sideline that the Aggie defender has no chance of defending. Note how quickly Seals gets rid of the ball on this throw. It’s plays like this that have Commodore Nation filled with hope about the future of the QB position on West End.

Despite facing a fierce pass rush for most of the evening vs the Tigers, note Seals’ ability to progress from his first option to his next read, the beneficiary being Cam Johnson on this big gain. Seals quickly adjusts his feet, buying more time between reads to find a streaking Johnson who put the Commodores in position to score.

Johnson’s reception would eventually set up the Commodores’ only points vs LSU, which would come on this laser from Seals to Bresnahan. Credit to Bresnahan for creating enough space for Seals to quickly get rid of the pigskin in the crisp manner offensive coordinator Todd Fitch preaches. The offensive line gets a nod for allowing the play to develop as well (although I’m sure talented LT Tyler Steen would love another crack at this play).

Looking Forward to the Gamecocks

For the Vanderbilt offense and young quarterback Ken Seals to give the Commodores a chance beat South Carolina on Saturday, we’ll need to see:

Tune in Saturday morning at Noon ET to see Seals and the Commodores take on South Carolina on the SEC Network.