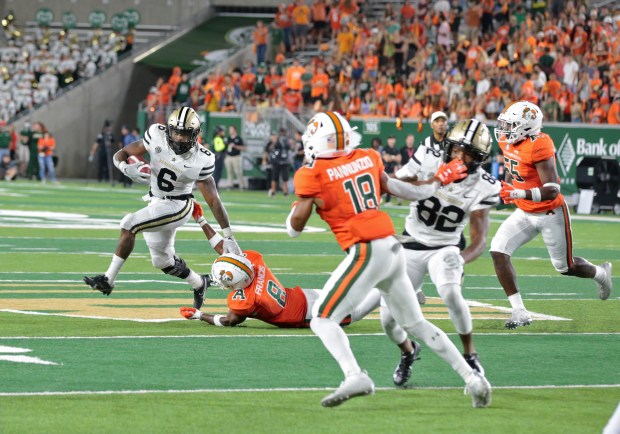 At last, the losing streak is over. While Clark Lea has tried to downplay the football program’s 11-game losing streak and the connection of his first team to previous teams, there’s no question this was a cathartic moment for the program. His postgame embrace with AD Candice Lee after earning his first victory as head coach spoke volumes.

Of course, it looked like that losing streak would extend to 12 games early. Vanderbilt’s defense looked unprepared and helpless as the Rams marched down the field with ease on the opening drive. CSU’s top weapon, TE Trey McBride (who could be a first round pick in next year’s draft) was wide open on busted coverages for gains of 27 and 21 yards. Meanwhile, David Bailey, the Rams’ running back, consistently gashed the defense with big runs. Vandy was penalized for having 13 players on the field at one point in the game. In addition, it took the Rams all of five plays and a hair over two minutes to score the first touchdown of the game.

The offensive troubles against ETSU carried over into this game as Vandy couldn’t get going for much of the first half. Ken Seals continued trying the deep sideline fade routes to Will Sheppard, which were largely ineffective (like last week). By the end of the first quarter, CSU had dominated the Commodores, out gaining them in yards 156 to 17. There seemed to be a lack of urgency, excitement, or passion with the players or coaches. Seals opened the second quarter with a lost fumble, which set up another Rams touchdown.

Down 14-0, it looked like it, once again, wouldn’t be Vandy’s night. Maybe you turned off your television at this point. If so, you missed one hell of a gut check. With their backs against the wall, a funny thing happened: Seals finally began to look like the quarterback who set program records as a freshman last season. He settled in with some dink and dunk completions to Cam Johnson, along with a couple of NFL worthy receptions by Chris Pierce.

Meanwhile, Re’Mahn Davis and Rocko Griffin finally established a few quality runs. It took nearly six quarters, but with 47 seconds left in the first half, the Commodores scored their first touchdown of the season with a 20-yard Pierce reception. CSU missed two field goal attempts in the first half, which would loom large.

With the offense finally showing life, the defense played reasonably well for most of the second half. On the Rams’ first possession, the Commodore defense forced its first turnover of the season – an impressive diving interception from Jaylen Mahoney. Vandy capitalized with a 54-yard drive culminating in a nine yard Cam Johnson touchdown reception.

After forcing another CSU three-and-out, Vandy drove 75 yards for the go-ahead touchdown with Seals sneaking into the endzone from one yard out. Now up 21-14, the Commodore defense gave the offense plenty of opportunities to seize control but, like the first quarter, Vandy had trouble sustaining drives due in large part to untimely penalties. Much of the second half was a punters’ duel between two outstanding legs: Vandy’s Harrison Smith and CSU’s Ryan Stonehouse. Smith, who had a 66 yarder in the first half, managed to pin the Rams and the 5-yard line. Stonehouse answered by flipping the field with an 81 punt after the drive stalled.

It looked like Vandy’s failure to land a knockout punch might come back to haunt them when CSU finally remembered they had arguably the best offensive player on the field and started going back to him late in the 4th quarter. After starting the game on fire, the Commodore defense had kept Trey McBride in check for most of the game, but he came alive in CSU’s late drive hauling in a 29-yard reception and a three-yard touchdown catch on fourth down to tie the game with 3:07 left.

At this point, the natural “SOV” (same old Vandy) worries that we’ve become familiar with began to rear its ugly head as fans feared they were staying up until 1am just to witness another heartbreak.  Fortunately, Seals wouldn’t be denied, and maybe grew up in the process by seizing the first victory of his career. He led this team down the field in the closing minutes to set up Joseph Bulovas’ 38-yard field goal that juuuuust snuck inside the left upright with 19 seconds left. For the first time in 658 days, Vandy and its fans could celebrate a football victory.

Look, we know Colorado State isn’t a great team, but they were a desperate team. Like Vanderbilt, they were 0-1 with a loss to an FCS program in their opener. This was a huge swing game for both programs.  A loss would lead to 0-2 after two “winnable” games and would essentially be the death knell for the rest of the year, while the winner would suddenly have a sense of redemption and a new lease on the season. This win is so important for so many reasons. Vandy overcame a two-touchdown deficit, a hostile environment, and the altitude with toughness and grit — traits that have been sorely lacking. The rest of the season won’t be easy, but this incremental progress is something to build on.

Congrats to Coach Lea and the team. Enjoy this one Vandy fans. We’ve earned it…