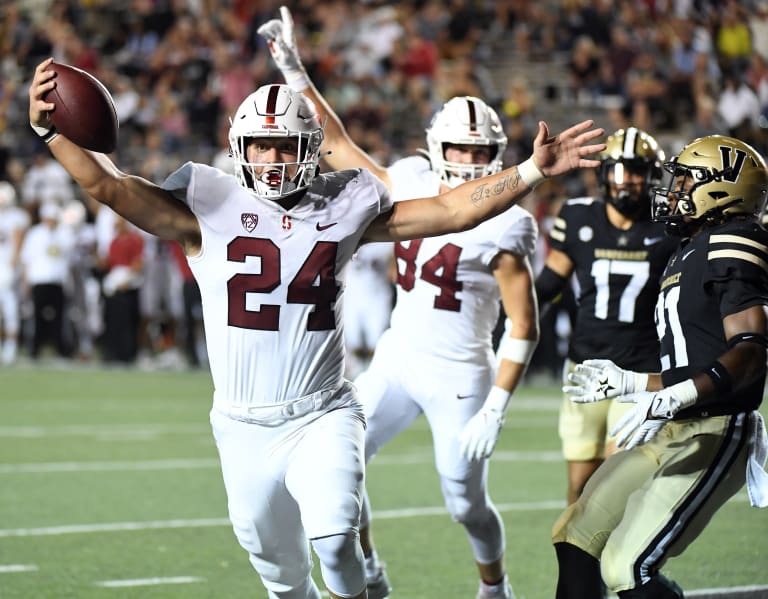 Stanford head coach David Shaw drew the ire of Commodore Nation this week with his comment that his school’s academic superiority gave him an advantage in recruiting nationally over comparable programs like Duke, Northwestern, and Vanderbilt. Unfortunately, it was difficult to argue his point after the Cardinal dismantled the Commodores 41-23 on Saturday. Despite a valiant effort from Vandy, Stanford was simply the better team with better players. With their massive size on offense, the Cardinal were able to impose their will in averaging 7.5 yards per play.

Defensively, Stanford weathered a hot start from Vandy and kept the Commodores in check for most of the second half to pull away. While it was competitive most of the first half, the frustrating aspect of this contest is how it was essentially lost in a brutal final two minutes before halftime.

This game started much like the previous game against CSU. Stanford took the opening kickoff and marched down with ease in just over two minutes for the game’s first touchdown. The Commodores answered with an impressive 14 play touchdown drive – their longest of the season.

Stanford scored another touchdown in their second position, and after a Vandy missed field goal it looked like the Cardinal was about to seize control of the game by driving down for a first and goal at the two-yard line. Then, the highlight sequence of the game for the Commodores. Stanford, having failed to score in their first three downs, elected not to kick a field goal and went for touchdown on 4th down – only to run into a brick wall.

The offense fed off the huge defensive stand and responded with a 14 play, 98-yard touchdown drive spanning 7:16 to tie the game. The 21,124 in attendance came to life, and the stadium was loud as it has been in recent memory.
Then, sadly, the lowlight sequence for the Commodores – the aforementioned final two minutes of the half. Stanford kicked 46-yard field goal with 1:53 remaining in the half to regain the lead. On the ensuing Commodore drive, quarterback Ken Seals threw a critical interception on the third play giving Stanford the ball on Vandy’s 31 with 1:22 left. Two plays later, Stanford added a touchdown to take a 24-14 lead with 40 seconds left. After a very quick three and out that took 20 seconds off the clock, Vandy was forced to punt for the first time in the game. Poor special team kick coverage, which was a critical problem all game, allowed a 48-yard return to Vanderbilt 17 setting up a 35-yard field goal as time expired.

And just like that, by self-destructing, the game was effectively over. Vandy went three and out to open the second half, and Stanford drove down for another touchdown – their sixth score in seven possessions – to go up 34-14 and put the game away.

“That was a killer swing of momentum for us tonight,” Vanderbilt coach Clark Lea said. “It was just, what a disappointing chain of events, It’s hard to beat good teams when you have that chance and momentum heading into halftime with possession coming back out, we have to put Stanford away and get to half and we just have to be better. We have to be cleaner in the kick game and then we have to be smarter with the ball there and have a chance to take that first possession of the second half and get a lead. It was a frustrating point of the game, it’s going to be something again that we teach off of and learn from but that was a killer swing in momentum.”

There were some bright spots, notably the Commodore running game which finally got going. Ray Davis ran for 76 yards on 12 carries (6.3 average) in the first half before an undisclosed injury left him in a boot for the second half. His backup Rocko Griffin had a breakthrough performance running for a game high 107 yards on 19 carries (5.6 average) showing explosiveness with two runs of over 30 yards.

The defense played better in the second half. Commodore fans wondered if Stanford even had a punter in the first half, but Vandy managed to force the Cardinal into punts on four straight possessions. Unfortunately, the damage was done by that point and Stanford had clearly taken its foot off the gas.

As the score would indicate, there were also several reasons for concern. With a sample size of three games now, I think it’s fair to ask “What’s up with Ken Seals?” It hasn’t been all bad of course. He was brilliant through stretches of the second and third quarters against CSU. He also started this game on fire. But the reality is, he has been largely ineffective early this season. He finished the game only 16 of 37 for a paltry 3.2 yards per attempt. In the second half alone, he gave the team no chance of creeping back into the game completing a dismal 6 of 17 for only 36 yards. All his numbers are down from his rookie year, including his 55.3% completion percentage (64.6% as a freshman), 4.2 yards per attempt (6.7 as a freshman), and 99.4 QB rating (127.6 as a freshman). He has thrown for three touchdowns, but has also accounted for five turnovers including three interceptions and two fumbles. The coaching staff has to figure out a way to get him playing more consistently.

It was also odd to see the Commodores appear to play with little to no urgency once they fell behind by 20. Midway through the third quarter, Vandy had driven deep into Stanford’s territory. With the score 34-14 at that point, Coach Lea elected to kick a field goal rather than going for it on fourth down. This effectively took a three-score game… down to a three-score game.

Defensively, Vanderbilt has forced one turnover in three games. It took them until their 12th quarter of the season – late in this game – to register their first sack of the year. This isn’t good enough. When a team like Vandy is going to be outmanned in almost every game they play, turnovers can be the great equalizer. If the Commodores are to have any chance at pulling off an upset in the SEC, they have to find away to get takeaways on defense.

While the hurry-up offense proved extremely effective early in the game, Vandy abandoned it for a more methodical tempo late in the third into the fourth quarter, even letting the play clock run down to five seconds or less in some cases. I won’t venture a guess into Lea’s mindset, but the optics certainly didn’t look good to the casual fans – many of whom had left by that point after so much excitement early.

Is Stanford what Vanderbilt is striving to reach? That was certainly part of the mindset in hiring Shaw’s highly regarded defensive coordinator Derek Mason away in 2014. As we all know, that didn’t work. Hopefully Lea will prove more adept at establishing the culture and talent level for a high-level academic institution to succeed at the power five level. If the Cardinal are indeed the measuring stick, Saturday night showed Lea still has a ways to go…