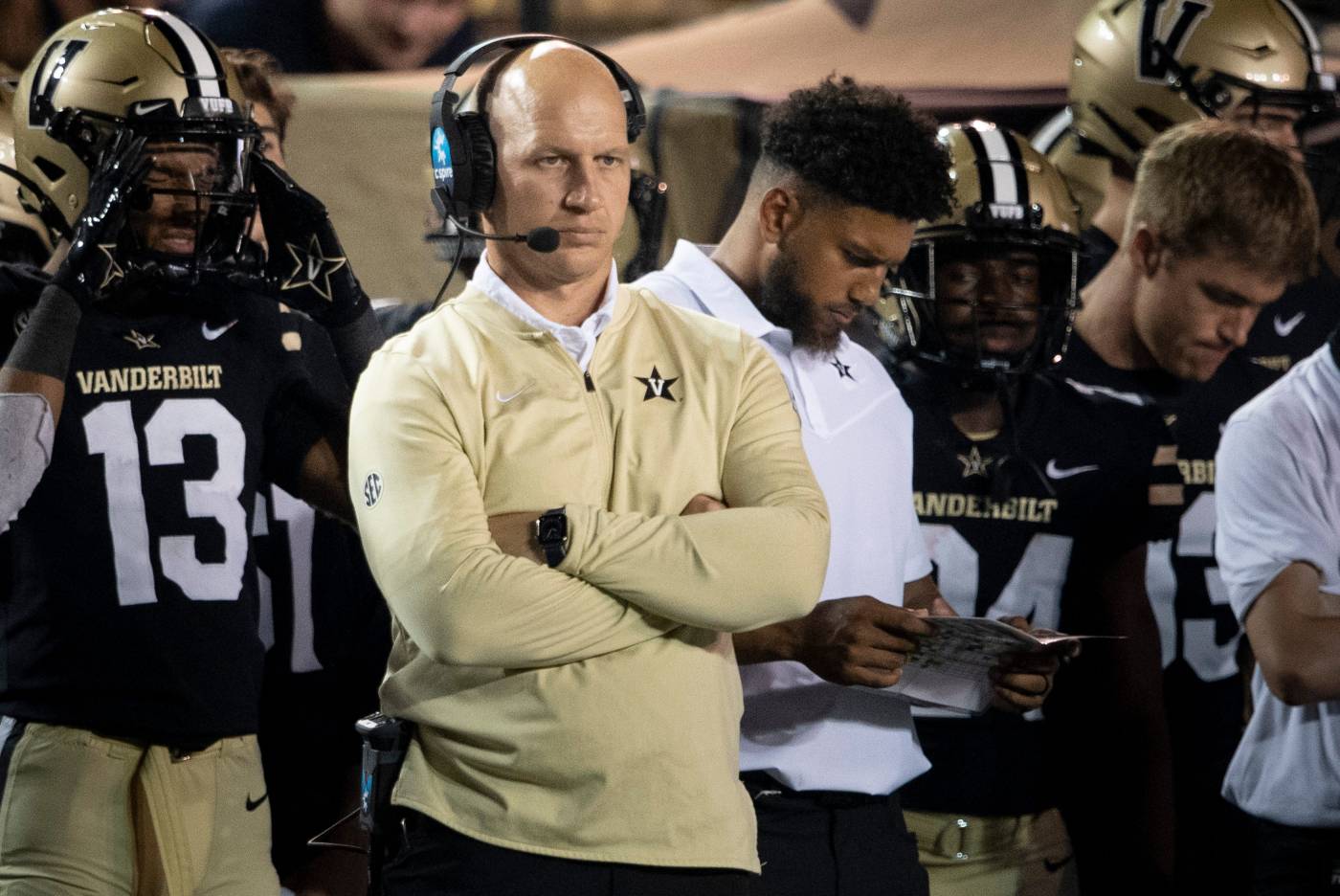 I have been very vocal about my opinion of this staff’s approach to the offensive side of the football. The gameplan week in, week out is predictable, complacent, unimaginative, and unsuccessful.

My criticisms have remained consistent throughout the year:

It turns out I am not alone in my criticisms.

An inside source tells The Dore Report,

“The entire offense is upset with Lynch’s play calling. They work on short & mid-range passing game all week and seldom use it; Cam (Johnson) & Ben (Bresnehan) in particular… The O-line is upset with the new blocking scheme and feel Coach Ross(amondo) had a much better plan.”

And the rift within the locker room doesn’t end with the players,

“Lea is very short with Lynch more and more each week, and Lynch is showing signs of stress to the offense.”

On Episode 114 of TDR, I was very direct saying that if Clark Lea and AD Candice Story Lee wanted Vanderbilt to become a real SEC football program, the offensive staff would be fired at the end of this season.

Based on the above information, I would say there is a real possibility of that happening. But the problems aren’t just based around offensive play calling and scheme, personnel usage seems to be a point of friction.

“The new staff is pushing for Will (Sheppard) due to his high upside in their opinion. (Other Receivers) graded higher than (Will) Sheppard after Spring & Fall camps, but they felt Will had more potential in contradiction to their “earn it” policy …. It doesn’t always show but (Will) Sheppard runs the wrong or poorly executed routes about 50% of the time, completely throwing the timing off.”

The consistent targets to Will Sheppard, as opposed to other options on the roster, has been a question in my mind throughout the year, but he does seem to be a talented player with very high upside. So, on that point, I don’t necessarily agree with the number of targets given to Sheppard, as opposed to someone like experienced and proven WR Amir Abdur-Rahman, but I can see a logical conclusion reached by this staff to allow him to gain experience and grow.

Shepherd has dropped a lot of catchable balls this year, and for an offense that struggles to move the ball, those drops are tough to overcome. According to SECStatCat.com, he leads the team with 8 drops and a 14.04% drop rate. The next highest is Chris Pierce with a 7.27% drop rate and 4 drops on the season.

But Sheppard is going to improve with time. He is young and does show flashes of being a legitimate playmaker. His usage within the offense is not a main gripe for me or Commodore fans in general. I think this generally more points toward the complexity of the system and struggles of the team as a whole to grasp the schemes.

The usage of one player in particular has dominated talking points and discussion throughout 2021, Cam Johnson.

“Cam (Johnson) & Devin’s (Boddie Jr.) getting equal time is not popular with the team”

I like Devin Boddie. I bet a lot of the staff and players think he has potential to be a hell of a player in years to come. That being said, Cam Johnson should be getting double the number of targets as Boddie Jr.

Cam has only been targeted 30 times, 4th on the team. With Shepherd, Pierce, and Boddie receiving 57, 55, and 37 targets respectively.

The utilization, or lack thereof, of Cam Johnson has been nothing short of criminal this season. A former 4-star, ESPN 300 recruit from Brentwood Academy, my expectations were for Johnson to have a breakout season with multiple games crossing the 100-yard mark and All-SEC honors being discussed.

With a season high of 66 yards and only one game with more than 4 receptions, nothing even close has materialized.

The issues in Joey Lynch’s scheme are obvious in this offense’s production through 6 games.

The frustration from all sides is obvious. Players, Coaches, Fans, Students, Media, everyone wants the issues to be fixed.

There is no reason this offense should be this bad. No, it doesn’t have the talent of teams of Vander-past. There is no Ke’Shawn Vaughn. Jordan Matthews isn’t putting on the, God strike me down as I am writing this, “Block V” helmet this Saturday.

But there is talent on this roster.

Hopefully some of the issues are able to be resolved in the last 6 games of the season, but I have my doubts. The tension was palpable last Saturday during the 42-0 loss to Florida, and we discussed the issues the team seemed to be having with the complexity and overall blah-ness of Joey Lynch’s entire offensive system, from an outside perspective, during Episode 114 of The Dore Report

I had never hoped to be so wrong.

A key Commodore will also not be suiting up for Saturday’s road contest against the South Carolina Gamecocks. Keep an eye out Commodore fans.

2 thoughts on “Source: “The entire offense is upset with Lynch’s play calling””